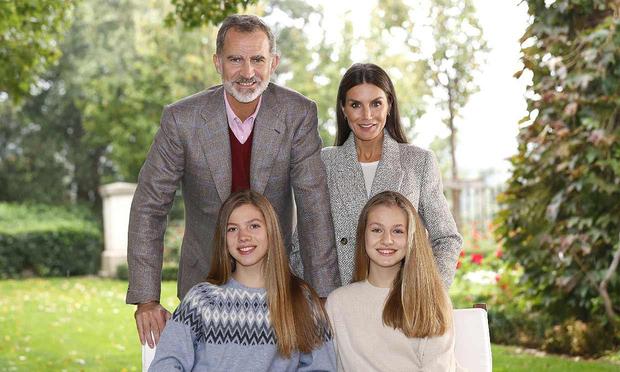 The Kings congratulate Christmas with a beautiful unpublished family portrait

On the eve of Christmas and with the return of Princess Leonor home on the occasion of her holidays, the Kings Felipe and Letizia have fulfilled the tradition and did not want to miss the opportunity to congratulate the most cherished festivities of the year. Don Felipe and Doña Letizia have chosen an unpublished image in which they appear with their daughters, Princess Leonor and the Infanta Sofia, made in the gardens of their residence, in the complex of the Palace of Zarzuela. For them it will be a very significant Christmas and they will surely squeeze to the maximum with their daughters. Princess Leonor marched to Wales on 30 August to study for two International Baccalaureate courses at UWC Atlantic College on boarding, and although she returned last October and saw her participate in the awards that bear her name, the four will surely take advantage of the last days of the year to enjoy as much time as possible together before the heir to the throne returns to the UK on 5 January. This year that is about to end has been the return to relative normalcy after a very hard months of pandemic. Thanks, to a great extent, to vaccination, the calendar of the Kings has resumed its pulse and even Don Felipe and Doña Letizia have made several international trips.

With this new image of the family, Don Felipe and Doña Letizia break the tradition of the last few years when only their daughters appeared on Christmas congratulation. In the picture you see the four very smiling. The Princess and her sister appear sitting on white chairs in the first place. Leonor wears a light sweater and white pants and the Infanta, a light blue sweater, the same one he wore last October in Santa Maria del Puerto, distinguished as Pueblo Emplar 2021.The heir passes her right arm under that of her sister. They both appear with their Mane loose and their hair falling on one of their shoulders. Behind him, his parents, just as smiling. Doña Letizia wears a marbling cahquette in gray tones. The image has been taken in the gardens of her residence inside the Palace of Zarzuela and everything seems to indicate that it has taken place these days, taking advantage of her return, on the 10th, of the Princess home on the occasion of her holidays at her school UWC Atlantic College in Wales, where she studies International Baccalaureate.

Almost at the same time, the Royal House has distributed the Christmas postcard of Don Juan Carlos and Doña Sofía. On this occasion they have chosen a Neapolitan Belén of the Royal Palace of Madrid, thus breaking the custom of the last Christmas in which they chose a painting related to the Nativity. This birth has been open to the public since the beginning of December in the Salón de Alabarderos de Palacio real, on whose walls is the portrait of the Family of Juan Carlos I, signed by Antonio López and based on photographs by Chema Conesa.

To teach and get better exhibitory writing you must teach reading skills-how to evaluate and analyze text! rad!

In 2020, the Kings opted for an unpublished image of their daughters. It was taken on the trip that the four made to Asturias on the occasion of the events of the Princess Awards of Asturias 2020, specifically the delivery to Somao as Pueblo Ejemplar. In it appears Princess Leonor in a cloth coat of paintings, pants, sneakers and pony. Her sister Sofia, with a padded vest with a hood, pants, sneakers and the same hairstyle. On the back of the postcard, Christmas and New Year are congratulated "especially full of hope" along with a handwritten phrase: "with our best wishes" and the signature of the monarch, Doña Letizia and her daughters.

-with expected meetings and important absences: this will be the Christmas of the royals.

This 2021 has undoubtedly been the great year of Princess Leonor: she has reached the age of 16, has done the Confirmation, presided over her first solo official act, strengthening her institutional role as heir and has flown out of the nest to experience what it is like to live in another country and without her family in an international environment with boys and girls of different nationalities, cultures and realities very different from hers.